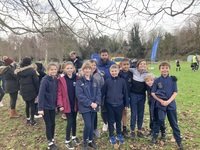 Some of our year 5 and 6 children took part in the inter schools cross country race on Wednesday 11th January. They all ran well despite the rain and the mud. Being a small school we are up against tough opposition. Ella came 14th for the year 5 girls. Eden was delighted to finish the race and helped another child who was struggling over the finish line, showing the school values through her actions. Verity also finished and came in 20th place. Unfortunately Milly did not manage to finish but gave it her best shot having been unwell all over the Christmas break. The boys races saw Luke coming in 16th, Lucas and Austin gave a great race coming in 25th and 26th respectively. Oliver was the only Year 6 boy and came in 29th place. Mikel gave another incredible performance retaining his 1st place position,. Well done to all the team! It was a hard afternoon but they represented the school well.

It was really tough, harder than the last race with Yr 5 boys and girls running together which made it really crowded.
The whole team did well for a small school and we only had a few runners, many other schools had double our amount.
After 1 lap I was breathless but so was everyone and we still had 2 laps to go! I tried my hardest to keep in the lead to get the school points. I was so happy to come 1st - and exhausted.
We all found it tough especially Milly who was recovering from her illness - I think we all did well as a team!
Mikel - Year 5

It rained quite hard. I enjoyed it very much even though I came last from our school. I was proud because this time I managed to do 3 laps and finish the race. I helped a girl walking to the fence, I then crossed the finish line beating two other girls.
Eden - Year 5

We use necessary cookies to make our site work. We'd also like to set optional analytics cookies to help us improve it. We won't set optional cookies unless you enable them. Using this tool will set a cookie on your device to remember your preferences.

Necessary cookies enable core functionality such as security, network management, and accessibility. You may disable these by changing your browser settings, but this may affect how the website functions.